City of Courtenay, Comox Valley, BC

A Pictorial View of the Comox Valley

The City of Courtenay was named after the Courtenay River which was named after George William Courtenay, Captain of the British Ship HMS Constance which was in the area ca 1846-1849 surveying the waters of the Georgia Strait and the coast of East Vancouver Island.
The settlement of Courtenay began in the spring of 1862.  Some of the first settlers were coal mIner’s from Nanaimo.  In Sept. of 1862, the H.M.S. Grappler arrived in Port  Augusta (Comox Harbour) with 35 settlers most of whom were from England, Scotland or Ireland, they joined the miners already here. Some of them then came up the small rivers by canoe and claimed land in the area as it was rich in nutrients and they knew they would survive and prosper.
Courtenay was Incorporated as a town in 1915 and a city in 1953. Population in 2011 was 24,699
(see Life and Times of the Comox Valley, by James Allan  Krause, ISBN 0-9681968-0-2)

History of Downtown Courtenay, BC

The business community of Courtenay was born on the east side of the Courtenay River in the 1880s,  surrounding the Courtenay Hotel that was finally demolished in the 1990’s.
With the construction on Reginald Pidcock’s sawmill on the west side of the river, and the subsequent erection of the first bridge, Joseph McPhee (known as the ‘Father of Courtenay’) laid out the first subdivision on the west side circa 1900. Thus Downtown Courtenay began its development, providing the many services and supplies required for a growing population.
The City of Courtenay was incorporated January 1, 1915. A massive fire destroyed a large part of its main street in 1916, as did a second fire in 1919.
Today Downtown Courtenay is a vibrant and unique downtown, which still boasts a quaint and friendly “small town” atmosphere, offering big city style shops, galleries, eateries and more.
For more information about the history of Courtenay, visit Heritage Courtenay
.downtowncourtenay.com/visitor-information/history 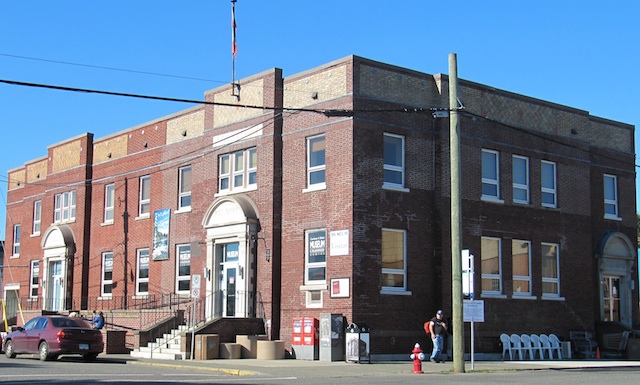 The unique brick and sandstone building was built in 1925 as a post office. Forty Thousand faced bricks from Redcliffe, Alberta were used, as well as 100.000 common bricks from Victoria.  It served as a central venue for residents to gather their mail and exchange news. The
The Post Office suffered  some damage in a 1946 earthquake, which measured 7.3 on the Richter scale.
In 1954, the building was doubled in size to provide more space. If you look at the front exterior, you can see the line of bricks that
marks the addition. In 2000, the Post Office building was completely revitalized by the Courtenay and District Historical Society
and City of Courtenay to create an expanded home for the Courtenay Museum.
Downtown CourtenayHeritageWalkbrochure.pdf(2).pdf
archives@island.net
http://www.courtenaymuseum.ca/
http://memorybc.ca/courtenay-and-district-museum-and-palaeontology-centre;isdiah

'The Sid Williams Theatre' first came to life under the name of 'The Gaiety Theatre' in the 1920's and, soon after, 'The Bickle Theatre' in the 1930's. Originally opened as a state-of-the-art sound movie theatre, the stage of the Bickle saw a number of plays and musical events before turning into an auction house.
On an early January morning in 1968, the Riverside Hotel at the corner of 5th Street and Cliffe Avenue in Courtenay burned down. This event was the turning point by which the citizens of the Comox Valley acquired a civic performing arts theatre.
After a great deal of fundraising, a land-swap involving Crown Zellerback, a generous donation by the E.W. Bickle family, and a lot of "blood, sweat, and tears" on the part of many individuals and groups in the community, the 'black hole that used to be the Riverside Hotel' got cleaned up. A fountain was built, the 'old Bickle' was renovated, and in September 1971 the new Civic Theatre and Civic Square were opened by Premier W.A.C. Bennett........
To view pictures and the complete history of the Sid Williams theatre go to:
http://www.sidwilliamstheatre.com/history.html
For upcoming events: www.sidwilliamstheatre.com
_________________________________________

Place of Interest to Visit