A Pictorial View of the Comox Valley

Village of Cumberland & Bevan, BC 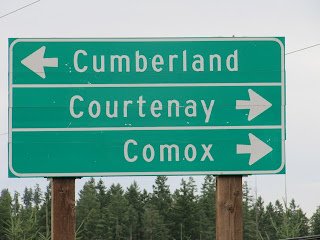 In 1864 the community of Union was founded when coal was found in what is now the Cumberland area. Robert Dunsmuir, and his son James, who commissioned and built Craigdarroch and Hatley Castles in the Victoria area, bought all the coal rights in the area in the 1880's.
http://www.bctravel.com/comox/history.html

The town of Cumberland was founded in 1889 and was incorporated nine years later. The Cumberland Museum has displays and artifacts from this colourful time or visit the businesses on the main street where the architecture reflects the past. In 1910 the Comox Logging and Railroad Co. was founded and for a time was the largest logging company in the British Empire. The rich heritage left behind by the logging is reflected by many of the street names found in the area.
http://www.bctravel.com/comox/history.html

There are many events and festivals in Cumberland, these are just a few.

Miners Memorial Day
Nowadays, Cumberland is resolutely forward-looking, but with powerful rear-view mirrors: Miners Memorial Day in late June commemorates the lives of nearly 300 miners who died in the mines. Ceremonies take place at the gravesite of labour and anti-war activist Ginger Goodwin, who was slain by a Mountie's bullet in 1918. Cumberland hasn't forgotten.
http://www.hellobc.com/cumberland/culture-history.aspx

Cumberland Empire Days
Every year, the Cumberland Empire Days Committee holds a week of events leading up to and including the long weekend in May.
It began in 1891, one of the oldest continuous festivals in BC. Scheduled highlights include the May Queen's public dinner and dance, pipe bands from the Pacific Northwest, street sales, pancake breakfasts, Highlands dancing, fashion shows and firefighting contests. Admission is free and everybody's welcome.
For more information contact the Cumberland Chamber of Commerce & Tourist Bureau
2680 Dunsmuir Abe, PO Box 250, Cumberland,BC. VOR 1S0
1-866-301-4636
chamber@cumberlandbc.org
http://www.hellobc.com/cumberland/culture-history.aspx
Cumberlands "Big Time Out"
Being the sort of place it is, Cumberland is a natural bastion of artists and musicians. Signalling the revival of Cumberland culture most ebulliently is the mid-Aug Big Time Out, a one-day music fest at Cumberland Park. Eclectic, award-winning talents from Canada, the US and abroad rock non-stop noon to midnight. Plus dancers, acrobats and circus performers.
http://www.hellobc.com/cumberland/culture-history.aspx

These building represent the stores that existed during the coal mining days,  they have false fronts but there is a hall and other business' behind the walls. They are part of the Cumberland Museum complex.
Entry is from the back of the building.

The Heritage of Cumberland

Ghost Towns & Mining Camps of Vancouver Island
by T. W. Paterson & Garnet Basque
Four miles to the north of Cumberland, the satellite community of Bevan came into being as the result of No. 7 Mine, which entered operation in 1901.  In 1911, 50 houses, a large store, school and hotel (Bevan Lodge) were erected here.  Only 10 years later, Bevan was dying.  Most of its fine homes were moved to a section of Cumberland known as Townsite. The rest, including a fair-sized Chinatown, were razed; only the hotel survived.............
The above information is from the following web site
http://books.google.ca/books?id=OCUlDDBTU8sC&pg=PA59&lpg=PA59&dq=Bevan,+Comox+Valley+bc&source=bl&ots=vkKGyEdKRp&sig=kn8yw9pXd2d9ev_RWwspZ8N5TnQ&hl=en&sa=X&ei=nHz0UN29FIKdiQL5n4HQBQ&ved=0CH8Q6AEwCTgK#v=onepage&q=Bevan%2C%20Comox%20Valley%20bc&f=false

A couple of interesting comments by readers on the above website


When I go back to Comox someday I want to revisit Bevan Ghost Town not far from Comox, it is the Bevan Mines location. There used to be old remenants of saloon type buildings, it is kinda spooky. Satans Choice used to sacrifice animals in the mines unfortunately so be carefull if you venture into the mines. The whole area gives me a creepy feeling but I wanna go back there and see it again.
Edited by - AcesHigh on 12/30/2009 12:07 PM

The Bevan Ghost Town I know of is mostly gone, some concrete foundations left, a Youth Hostel on the site, a paint-ball battle range next to that, many Mtn.Bike trails, the other features destroyed by very recent logging.


Take your bike, enjoyable river access points nearby. [ Also two cougars still roaming about that were involved in 2009 confrontations with pets]. 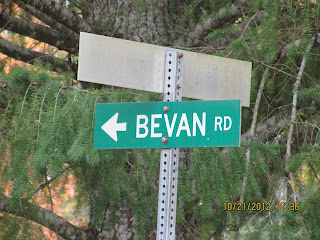 
This page is copyrighted, please contact the author at rhodaross@telus.net  for permission to use.